Hiya guys, TAD here, back again, once again! Since it's July, we're continuing progress on the finale of Feline Fantasies! Most major bugs should be eradicated by now. We'll be working on fixing the small bugs like textual errors and such along the way! We'll also be rebalancing some of the mini-games and give them a little bit of polish. They'll become full screen like the Topaz Mini-Game has become, they'll get some new UIs, some new sound effects and the Microchip will have a greater impact on them.

Other than that, we'll slowly be working on developing the ending. Unfortunately, development might slow down a bit at the moment due to some unforeseen circumstances regarding Side B. He has opted to take it a little bit easy for now, so assume that progress will be a bit slow for the first few months. I apologize in advance.

Other than that, I'll be posting here weekly, starting with polls which are always free to vote, and the sketches for Esix' new SFW art, which I'll be posting for all my Patrons next week. :3 Once more, thank you to everybody who decided to support us and this project! It's massively appreciated and I hope y'all enjoy the end result!

For now, have a great weekend, take care and I'll see y'all next week!

A visual novel style game where you can find, meet and interact with different furry felines from your favourite games.

Add Game To Collection
TAD & Side B

Reply
Side B139 days ago

Be more specific.
Which version of the game and which OS are you using? 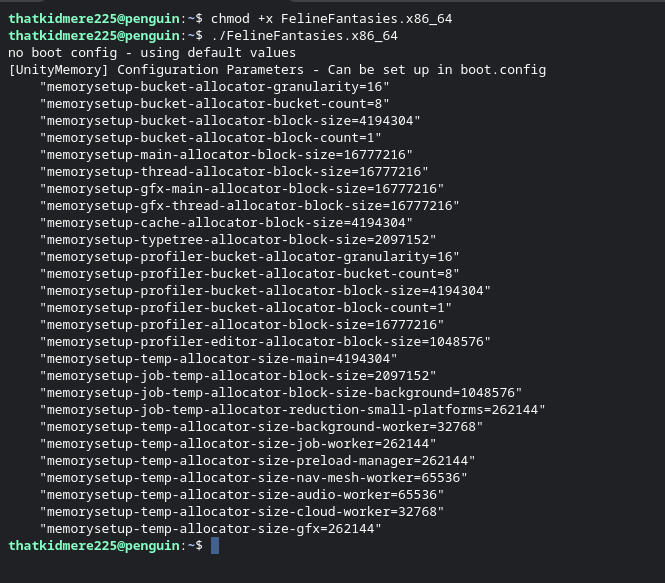 Reply
Side B138 days ago

You typed the filename wrong.
There's a space between Feline and Fantasies.
"Feline Fantasies.x86_64"

i made the file name different, wen i Try to export it, it think Feline and Fantasies are 2 different words, so it tries to look for a file named Felin and a file name Fantasies, it wy i had to change  da file name and remove the space

Reply
Side B137 days ago

Then I'm afraid I'm not sure how to help you. I do not know Linux enough to debug such environment.

Okay so I have some bugs so when I try to get rope and wood it doesn't always give it to me it happens on a northern island sometimes on the south it happens everywhere the item gathering is kinda broke also on the second island part 2 of the game it doesn't autosave it hasn't fone it yet the game kinda broke buggy and glitchy I love the game please fix it and more like maybe also add a yiff tag in the itch.io thing it says furry porn and NSFW and more but it should also have yiff, okay please add and fix I love the game okay bye and thanks for everything okay good luck and goodbye :)

Thanks for working so consistently on this! I'm glad to see it worked on, an can't wait to see what the finale has in store and how it all ends.